The residents of this Northampton home were enjoying a nice quite evening in after a long day when they suddenly realized that the room they were in was full of smoke. This, of course, raised immediate alarm and they tore through the house, looking for the origin of the house fire—trying to determine what exactly was on fire. They couldn’t find anything though which resulted in curiosity and a deepening sense of worry. They contacted their insurance and they contacted Cityline construction for a second opinion.

We all walked through the house measuring the level of smoke damage (as seen below) and we were surprised to find the smoke damage was more extensive than originally suspected. It was determined that the smoke damage in the home was done over the course of time rather than one quick fire. Having our experience to tap into, the signs of sustained smoke exposure to the home were easy to spot. The damage was even more prevalent in the living room; however we still had no clue as to what caused the damage in the first place.

This is why we always interview our clients, while others were ready to write this off as the result of burning too many candles in the home too often; the home owners knew this wasn’t the case and so investigated to find the true cause of the problem.

During our several interviews with the home owner our conversations kept coming back to the same point, they got back home and made a fire in their fire place to heat up the home. This got us thinking, and sure enough, when we checked our theory we were right. The fire place was malfunctioning; the chimney damper was not working properly. 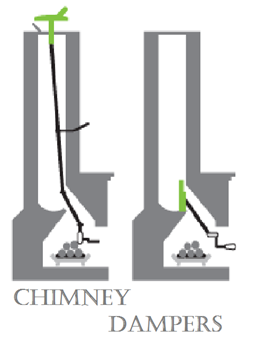 What is a Chimney Damper?

A chimney damper is used to keep hot air from escaping the home whenever the fire is not in use. It also works to keep cold air out so the house stays nice and toasty. Except in this case, it was keeping the smoke in the house. Our teams of experts were able to demonstrate how the chimney damper was malfunctioning, resulting in most of the smoke having to double back into the home rather then up the chimney. The spring holding the damper in place was no longer working, resulting in the damper easing its way down to block off the access to the chimney. This malfunctioning chimney damper caused major smoke damage over the course of the winter, as the home owners used the fire place often. Because the smoke damage accumulated over time rather than all at once, the buildup was quite extensive.

We treated this like a unique puff back; instead of a broken furnace we had a broken fireplace. We went room by room decontaminating everywhere, and herding the smoke out in the open to be obliterated and collected by our filtration machines. The vaulted rooms in the home presented a slight challenge as it greatly increased the surface area we had to cover but, with the help of some scaffolding and long reaching vacuums, this was no problem.

After restoring the home back to pre-soot conditions, we fixed the faulty chimney damper to help prevent future problems. After winning our battle with the soot, we put everything back where we found it. The owners of the home were very happy with the work we did and are grateful for our diligence. Because of our diligence, the homeowners knew the true cause of the smoke damage and they were not at fault.

Riddle of the day: What rhymes with “Restoration work”?

You’re right! It is “Your local Bennett Toyota Dealership”!

Just like the one you were thinking of in your local Allentown. Now is the time to check out a Toyota—like all our restorations— that is customized to fit your needs. Make sure to check out their web page and find the right Toyota for you!